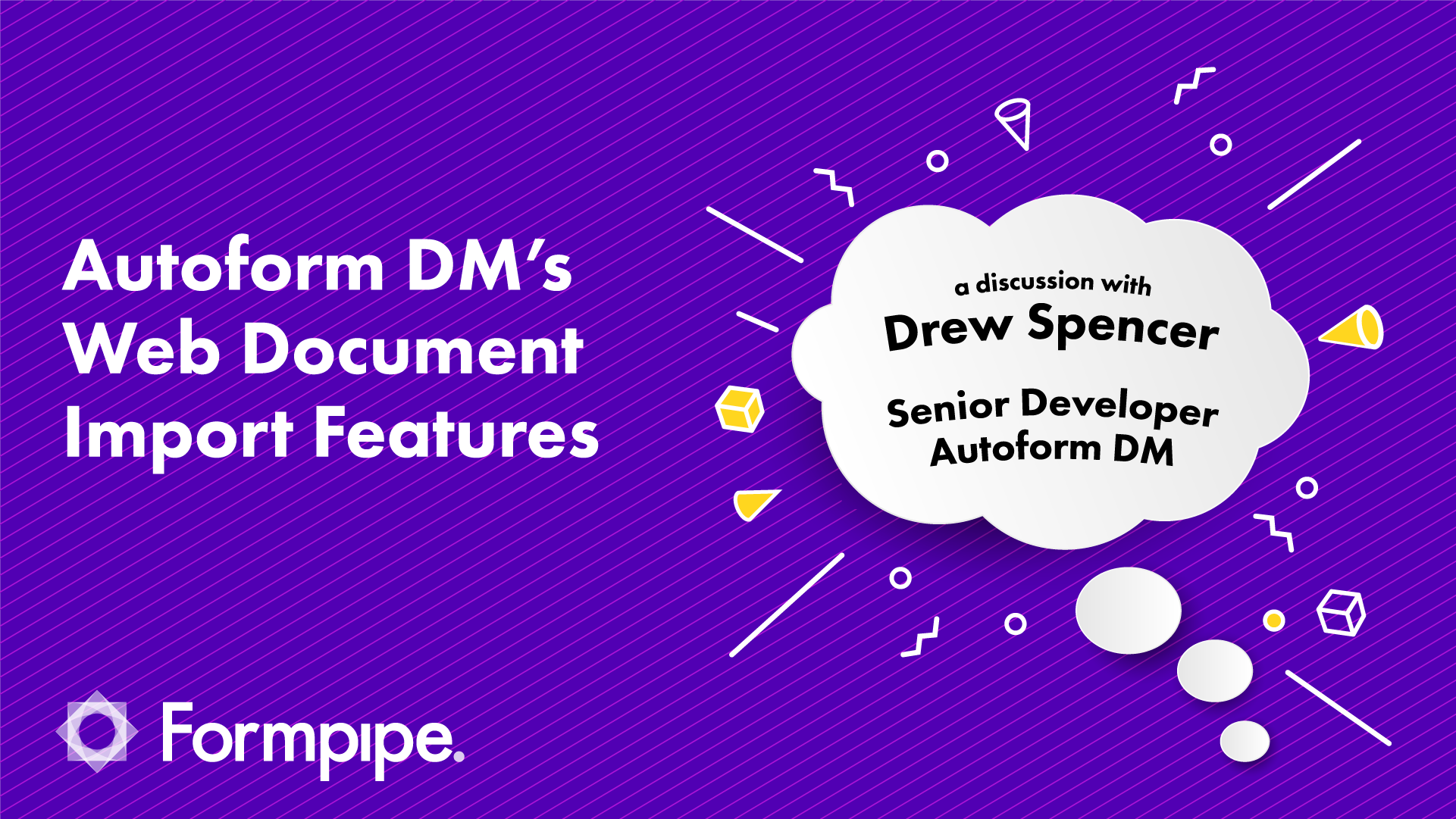 At the end of June we announced the official release of Autoform DM 10.2, the latest version of Formpipe’s powerful digital archiving tool which brings speed, simplicity and flexibility to document management. The new release offers users an exciting multitude of updates including multiple batch support for document import, the introduction of single-sign-on and an easy-to-navigate UI.

We caught up with Drew Spencer, Senior Developer for Autoform DM. He’s been instrumental in the build process, with a focus on updating and improving the platform’s document import feature. In this chat, he discusses what makes this version greater than the last, along with his personal highlights/challenges of the development experience.

Hey Drew, great to see you! Just to fill readers in, can you tell us a bit about what you do here at Formpipe?

Hello! Sure thing. I mean, my official role is Senior Developer. But, I'm also what's known as Scrum Master, so I'm kind of in charge of the overall release process and making sure we release on time. So keeping everyone on track, basically. Other than that, as a Senior Developer, I'm a Feature Owner mainly for the ‘Document Import’ tool within Autoform DM, which has been ongoing for the last three releases.

For those who aren't aware, what exactly is the ‘Document Import’ feature on Autoform DM?

Of course, what is it? Right. Well, Autoform DM is a web-based solution for storing  documents. The ‘document import’ feature allows customers to configure an unlimited number of document import applications within DM. They can be configured with any set of document definitions, with any key data, anything that DM can handle, basically. And then that allows users of those apps to simply drag the files on from their computer and enter all the data in a single screen in a nice clean workflow.

DM 10.2 was recently released and there’s been some exciting updates, particularly when it comes to the document import tool, could you talk us through those please?

Yes, we’ve just added probably the one of the most important features that we've been working towards, which is being able to drop a mixed set of documents onto the app. So, rather than having to manually sort them, which is what our customers have been doing for many years, they can now just use drag and drop to categorise them. It’s now a much more tactile workflow which is great news for our users.

Another aspect of this long-running project has been replacing our old applet-based solution, which was quite insecure. We had to deprecate that because it was only supported by Internet Explorer, due to it being such an out-of-date technology. So, yeah, the new situation is completely web-based. As a result, it’s now a lot easier to use, easier to install and easier to support. Plus, it's built using a new front end technology so it’s the first phase of bringing DM into a more modern era.

And what have been your primary responsibilities for this project?

I’ve been very hands-on in the actual development side of things. As the Feature Owner for this particular project, it's been largely my design and my vision, I suppose. And then another Developer called Sam Marston has been working very closely on it with me too. It’s been a lot of fun turning the vision into reality.

What benefits will the updates in DM 10.2 have for users?

It will definitely save users time from an admin point of view, as well as from a technical point of view as it offers a quicker installation and automatic upgrades.

Generally, bringing the functionality into the core product (and out of thick-client apps) makes it easier for everyone as you don't end up with these multiple bits of a software communicating with each other, which isn't necessarily needed anymore. It was needed ten years ago when we designed the thick-client and applet-based solutions, because you couldn't really do what we're doing now in the browser. Now you can, so really, it's just designed to make that import process easier and quicker, whether you import in a single document or a batch of 100.

You mentioned this has been a long-running project, what were the key challenges along the way and how did you overcome those?

Gosh, how long have you got? Just kidding. Well, as I said before, we’ve been working with new technologies that we weren’t super familiar with, which is always a challenging yet exciting experience. Other than that, it’s all gone pretty smoothly to be honest. It's been a very enjoyable time and we've all loved getting into some new tech. Developers like to build fancy, cool looking products so it’s been great to work with new tools, and hopefully it adds a lot value to the product as well.

From a personal perspective, what's been your favourite aspect of this entire process?

Yeah, I mean, I've really enjoyed leading the feature and being able to design something from scratch in a 15 year old piece of software! It can be quite difficult to make changes to a piece of technology of that age, especially the interface because it becomes very embedded over time and then quite brittle. So if you're going to change something, then there’s a fair bit of overhead to that. So yeah, making those changes and using React and some cool JavaScript tools has been fantastic.

Great! So, how can users access DM 10.2? Do they need to buy it or can they just upgrade their existing version of DM?

It’s really simple, any DM users with version 10 upwards will be able to do a simple/quick/free upgrade to 10.2. If users haven’t done it yet, we would definitely recommend updating to the latest version to get the new features as this release is significantly improved from the last version.

Want to know more about the new features of Autoform DM? You can find all of the documentation here. It’s clear, searchable, and includes all the information & instructions needed to get the most out of DM 10.2.

Alternatively, if you don’t already have Autoform DM, you can book a demo.

Mobilising Sustainability in the Banking Industry Through Digital Processes 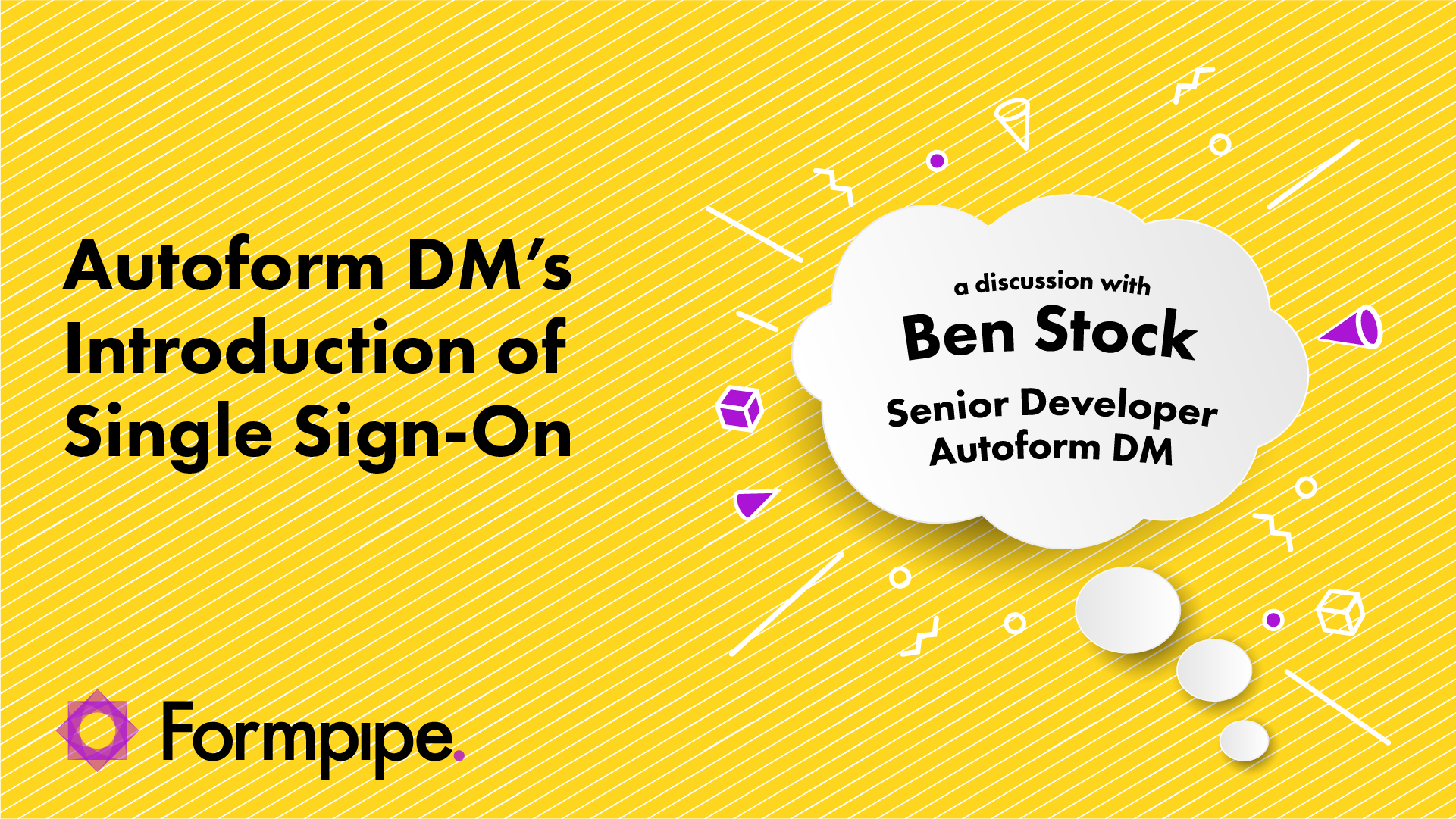 Q&A with an Autoform DM Developer: The Introduction of SSO